Existing theories of polarization argue that state political parties will polarize alongside their national counterparts due to pressure from national politicians and media outlets and growing pressure from polarized state constituents. My research challenges these theories by exploring variation in state partisan rhetoric and assessing the factors that contribute to bipartisan cooperation between the state and federal governments. I have a number of ongoing projects that contribute to this research agenda. 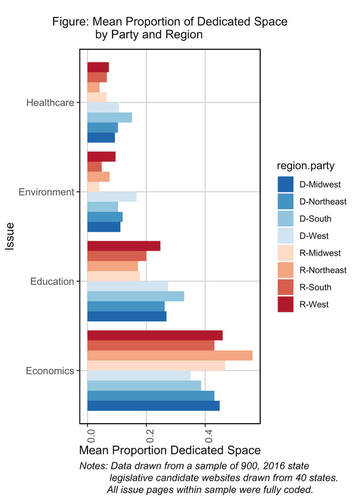 State politics directly impacts the lives of citizens in myriad ways including infrastructure investment, education, regulatory power, taxes, electoral law and even social welfare. However, the growing theory of the nationalization of state politics reduces much of this dynamic to a reflection of national partisan agendas and polarization.

Using the Digital Campaigns Project, I explore both variation in salience and rhetoric within campaign websites for state legislative candidates. Preliminary results reveal that, despite a growing emphasis on national issues amongst the electorate a number of factors contribute to variation in issue salience across the states. First, specific regional public concerns regarding issues like healthcare, immigration, gun control, and environmental and energy policy can cause candidates from both parties to increase emphasis on an issue simultaneously. Secondly, key issues like economics, education, infrastructure investment, and public assistance are used by state level candidates to challenge incumbent partisans, producing within-party variation in issue emphasis across the nation. It is within these arenas where the aphorism, “all politics is local” remains true. I find that, in spite of nationalization and polarization, state-level candidates are more likely to position themselves relative to the state capital rather than the national one. Future studies will continue to expand on this research by evaluating the content of messaging within each policy arena, as well as exploring the impact of district demographics and candidate qualities on campaign content. 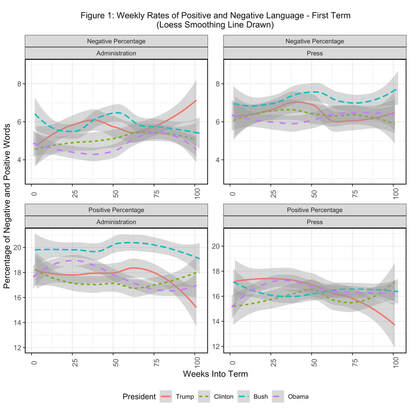 ​The presidents and their representatives stand in a unique position to control and censor partisan messages thanks to the extensive attention that the press pays to the executive branch. In spite of this capacity, their role in policing co-partisans and challenging partisan rivals remains relatively unexamined. This project aims to correct this by exploring the impact of polarization on presidential rhetoric from President Clinton through President Trump. Using sentiment analysis to gauge negative, positive, and aggressive language from the presidents and their representatives, we explore their capacity to police party members and challenge partisan opposition during briefings, press conferences, and on twitter.  The first paper from this project explored the specific variation in negative and positive language during press briefings under the Trump Administration. We found that the Trump Administration, unlike their predecessors, exhibited higher levels of negative language and a decline in positive language in response to an increase in negativity by the press.

Competition and Polarization in Multi-level Government

The increase in partisan polarization at the national level has corresponded to an increase in partisan resistance and a decline in the ability of the federal government to respond to public concerns with effective policy. While literature has shown that state politics has polarized in tandem with the national political parties, there are abundant examples of recent bi-partisan cooperation between national and state governments. This project explores the conditions under which American federalism might offer a mechanism for mitigating polarization by producing opportunities for bi-partisan policy implementation. I argue that this potential is rooted in two mechanisms.

The implementation process of the highly polarized 2010 Patient Protection and Affordable Care Act (ACA) provides an excellent example of this trend as a number of Republican led states, including Ohio, New Mexico, and Arizona bucked the national Republican Party’s agenda and expanded Medicaid. I find that the effect of state variation in constituent preferences is magnified when the state majority party risked loss of control of state institutions due to a strong competitive partisan environment. In the ongoing book project, I explore this dynamic within other policy arenas, arguing that by disrupting partisan brinksmanship through adoption of the rival party’s policies, states can create new bi-partisan momentum for nationally polarized policies.